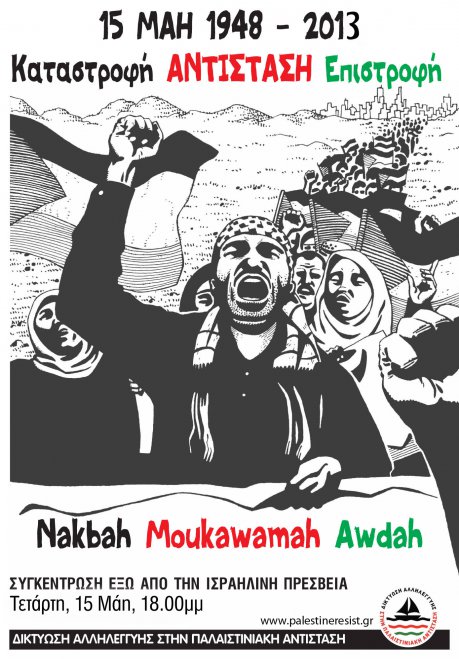 PROTEST AT THE ISRAELI EMBASSY – Solidarity to Palestinian hunger strikers

On May 15th is the 64th anniversary of Nakbah, the destruction of 1948 Palestine. The day when through fire and steel 750.000 Palestinians were uprooted from their homes, opening the way for the establishment of the Israeli state. Even today, 5 million Palestinian refugees throughout the world demand their obvious, as well as internationally guaranteed, right to return.

This year’s anniversary of Nakbah coincides with the peak of the heroic struggle of Palestinian Prisoners on hunger strike in Israeli jails. Two of them, Thaer Halahleh and Βilal Diab, prisoners under administrative detention, with no official charges or trial, have already reached the 73d day of hunger strike, the longest in duration hunger strike of Palestinian Prisoners in history, and their health condition is considered critical. Their lives are in danger at any given moment. 4 more hunger strikers have completed from 50 to 67 days on hunger strike, and their condition is also considered critically dangerous. At the same time, about 2000 Palestinian prisoners, defying repression in the Israeli jails, are close to completing one month of hunger strike, claiming their obvious demands: termination of the inhumane practice of solitary confinement, termination of torture and humiliations (including body searching by stripping), better detention conditions, including access to education and information, and visiting rights for relatives (a right which detainees from the Gaza Strip have been deprived of for more than 6 years). Also, they demand the termination of the practice of administrative detention, with no official charges or trial, which can be indefinitely renewed.